So far we’ve learned how to work in the public scene, and how to conduct yourself in a scene. Now we are going to talk about some of the tools, this time around I want to talk about my favourite tool floggers. Floggers have been around in one form or another since early Sparta, though it’s quite possible it’s been around longer. Your typical modern flogger consists of a handle and several ‘falls’ made of either suede, leather, rubber, rope, plastic, or PVC. Most floggers either deliver a deep tissue impact (described as a thunk or thuddy type) or have a sharp (stingy) impact. The goal of using a flogger is to trick the submissive’s body into thinking its under more strain then it actually is and release a massive amount of endorphin’s, releasing enough will typically put someone into the deep almost meditative state of ‘sub-space’ which when I work on someone with a flogger, is my goal. So let’s go over the components

The traditional handle is a solid cylinder of wood, plastic, or metal. With the falls attached by either a rivit, staple, or nail. Here are a couple of examples:

There are a couple of special cases, for example the nun’s discipline, as you can see these are designed to be held kind of like brass knucles, and rocked in your hand back and forth, I have the pair displayed and they are just perfect to work on someone standing, they are also one of only a few pairs in Toronto, that I know of.

Sloped handle floggers, I’m going to say this right now, if you are a fencer and prefer the ‘pistol grip’ blades, or you’re a fan or star wars ‘count douku’ this is totally the style for you. Designed to be held more like a handshake, what makes this design so lusted after by yours truly is that with a large weight at the bottom and my finger pointed up the shaft the flogger means it not only goes exactly where I want it to go but the counter weight allows me to keep flogging someone for hours and hours. A glory to behold. The sub that gets me a pair of my own will be flogged with both frequency and zeal.

Swivel head floggers are new up and comer in the flogging scene, a caster is fitted between the handle and the falls, this allows the falls to carry their own weight and reduces the arm stress on the Dom, this is again a design that reduces arm stress and allows for a longer flogging session.

T-bar floggers, as the name suggests it’s a t-bar with the falls on the end , you let be falls sit between the middle and ring finger and flog away, nice for a change of pace, and much easier to use one in each hand.

As we said before the falls are usually made from suede, leather, rubber, rope, plastic, or PVC. Sometimes though you get someone who has made something really funky, like rabbit fur or tubing from a fish tank aquarium.

With all these materials it really depends on how their cut, then number of falls and how well conditioned the material is. Suede is usually very supple and good for a warm up/beginner tool, but lacks the punch more advanced users crave. There are literally as many kinds of leather out there as there are critters walking the earth, mostly though leather is limited to cow, deer, buffalo, moose, kangaroo, snake, pig and eel . Leather from the larger animals tends to be thicker and thus have more thunk, Moose being a massive critter being the most thunky and pig tending to have the most sting. Veggie is pretty variable and is a good option for people who have problems with leather, a word of caution though, don’t leave veggie leather in the sun too long, and test the veggie toys before hand and they can change over time. Rope is usually nylon ‘jump’ cord and can vary wildly, one of my stingiest toys is jump rope with the ends of the falls melted, and conversely one of the most thunky is a jump cord flogger that is all tied two pieces of rope. Pictures are below.

Plastic and PVC I usually only recommend for either heavy hitters or people who have nerve damage and can’t feel the part of the body I’m going to be working on otherwise. These tools are usually cheep (truth be told I’ve built one out of stuff I bought at a dollar store and spent only 3 dollars on the whole thing.) and usually mass produced. This in my opinion is a shame, the first flogger I bought was a pvc flogger from a kit and it was the most stingy, painful little critter I’ve ever owned. pet lexie threatened to toss it into a wood chipper and if it wasn’t for sentiment I would probably have let her. I’ve seen a PVC tube flogger snap a wooden school desk in half. I’m very serious when I say think very carefully before using one of these.

Technique plays a lot into flogging someone, and training on how to use a flogger properly takes time and patience. When I was training Doms, I would usually tell them that while it can take an hour or two to get the basics down properly it can take years to get to the point where you can just pick up a random flogger and flog a sub into ecstasy. The goal of a good flogging is to hit the upper back and the fatty part of the butt, some submissive can also handle being flogged on the breasts, and thigh, but you have to be really careful as one slip can be very painful and leave permanent marks. For the beginner I would recommend focusing on the back. To learn to use one flogger, find a door with a round door knob, your goal is to hit only the knob, nothing else. When you can do that about 15 times a minute for about 5 minutes you’re ready for a person. If you can do it for about 15 to 20 minutes you can consider working on places other than the back. To use two floggers at the same time the best training I’ve ever found is to get a set of double dutch rope, attach the other end of the rope to a wall and use sidewalk chalk to draw a tennis ball sized target on the ground, turn the jump rope, one in each hand when you can use both ropes to hit the target (and only the target) at a good rhythm until you have obliterated the chalk drawing, then you’re ready to double dutch a play partner.

So there you have it. Flogging 101, if you want to learn more, I totally recommend the book “Flogging” by Joseph W. Bean ISBN: 1-890159-27-1 available at chapters or where ever kinkier books are sold.

Until then, go out there and get your freak on. 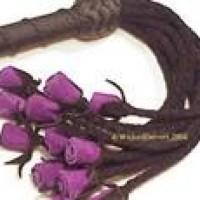